Don't do the drama

I've been rolling my eyes since I was a young monkey.  I'm pretty sure the reason I spent half my adult life trying to talk to school kids about safe sex and good relationships was because my karmic reward for each and every time I rolled my eyes at the Old Woman was to find myself receiving the eye roll from a whole classroom of brats.

But, I never managed to do the "mean girl" thing or drama.  I'm a drama free sort of monkey.  I much prefer all the dramas that touch my life to be those of other people.  (I also cannot stand bickering. Ugh.)

Mean Girls are an interesting study of human behavior.  Their actions are wholly intentional, but they operate under the illusion of plausible deniability.  They believe they are being calculatedly vicious.  I have a friend who teachers middle grades who once told me that little boys are like gorillas . . . pounding their chests and making as much noise as possible to establish their position with their peers.  But, she said that little girls were like cats  . . . quietly grooming themselves when really they are looking to sharpen their claws across your face the minute they think they can get away with it.

So, today we're leaving work, all of us at the same time which is rare.  I'm holding the door for my co workers and say "have a good weekend."  One co worker returns the sentiment but Problem Child employee stays silent, gets to the parking lot and very pointedly looks at the other co worker and says "bye" in the most exaggeratedly sweet voice she could muster.

Really?  If you're still thinking that being a Mean Girl at 25 is the way to go through life, I hope you never have children.
Posted by The Super Bongo at 9:26 PM

Proof of my Dominance 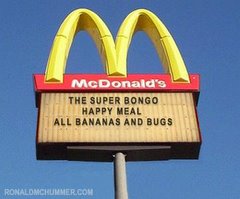 Control the food supply, control everything.

The Super Bongo
I'm a monkey. What more did you expect?